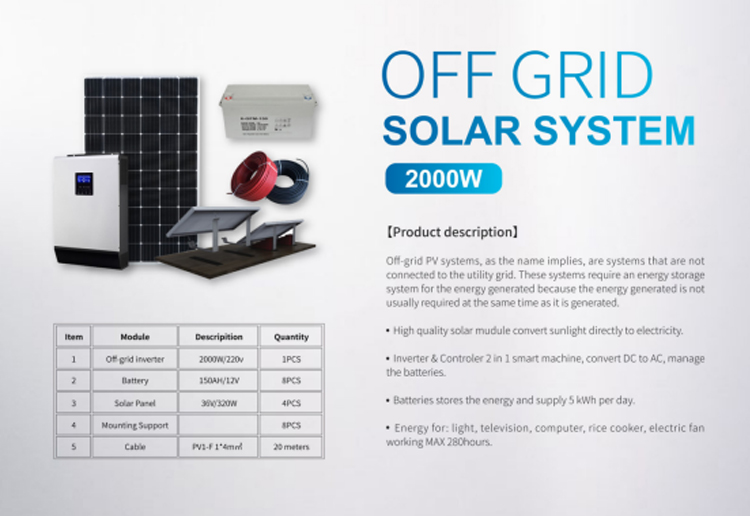 Off -grid power generation system is made up of a number of individual solar modules usually of 12 volts with power outputs of between 50 and 300+ watts each. These PV panels are then combined into a single array to give the desired power output. Currently, the most cost-effective solar panels are those made up of 60, 72, 120 or 144 cells. These days, monocrystalline panels are the industry standard in most systems.

In the solar power industry, there are two main battery chemistries – lead acid and lithium. The two main types of lead acid batteries used in solar are flooded lead acid batteries and sealed AGM batteries. Batteries are used to store the solar-produced electricity for nighttime or emergency use during the day. Depending upon the solar array configuration, battery banks can be of 12V, 24V or 48V and many hundreds of amperes in total.

The inverter’s purpose is to take DC power that is stored in the battery bank and converting it to usable AC power and sending it to your loads so it can be used in the same manner as plugging into an AC outlet in a home. The inverter can be another optional unit in a stand alone system. Inverters are used to convert the 12V, 24V or 48 Volts direct current (DC) power from the solar array and batteries into an alternating current (AC) electricity and power of either 120 VAC or 240 VAC for use in the home to power AC mains appliances such as TV’s, washing machines, freezers, etc.

The final component required in and PV solar system is the electrical wiring. The cables need to be correctly rated for the voltage and power requirements.